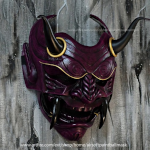 Bayushi Mitsu had returned to the Emerald Magistrate's yashiki, once again to speak to Mirumoto Namika.

"Mirumoto-sama," he greeted, extending a folded letter to the yoriki. "I have some information you may find of interest."

The scorpion tilted his head just so as he regarded her from behind his mask. "I found that the samurai you are investigating has not been putting even a reasonable facade of effort towards the miai. It seems instead that our samurai has been courting the peasants of the Shika lands, with platitudes that resemble those of the Perfect Land sect." Bayushi shrugged. "While it doesn't align with the idea of a samurai putting aside justice for their own personal gain, it is quite troubling, wouldn't you say?"

He pointed to the letter. "You'll find the details there, along with a list of several incidents from the samurai's past that corroborate this association. The records in the Deer's library will verify those."

Bayushi tapped his chin. "I admit, it isn't enough to bring a charge, but it is the perfect basis for a formal investigation, or for seeking a more personal satisfaction, if that is what you prefer. Either way, I think it needs to be dealt with - spreading potentially rebellious beliefs into the lands of another clan is particularly troubling, and relatively near to the capital no less."
Scorpion Clan ❖ Retainer
Glory: 46 ❖ Honor: 30 ❖ Status: 35
Carries: fine clothing, deep burgundy full face mask with gold trim, dark steel daisho with burgundy wrappings
“Right isn’t always right.”
Top

Namika took her time examining the proof that the Bayushi brought without saying a word. If there was any hope of fooling her with forged papers, they would have been crushed.

But they weren't fake.

"Very well then, Once the traitor is dealt with, I will recommend that Doji-sama make you his new yoriki to fill my absence." she said with finality.
Dragon Clan * Emerald Yoriki

"Truth and justice are not the same thing. You grasp for the truth, but I seek justice."
Top

Mirumoto Namika wrote: ↑
Thu Sep 09, 2021 4:22 am
"Very well then, Once the traitor is dealt with, I will recommend that Doji-sama make you his new yoriki to fill my absence." she said with finality.

Bayushi nodded. "With the seriousness of this case, I can't say it's a joyous occasion; however, I do look forward to the opportunity to make a difference. My thanks, and my continued assistance should you need it, are yours."